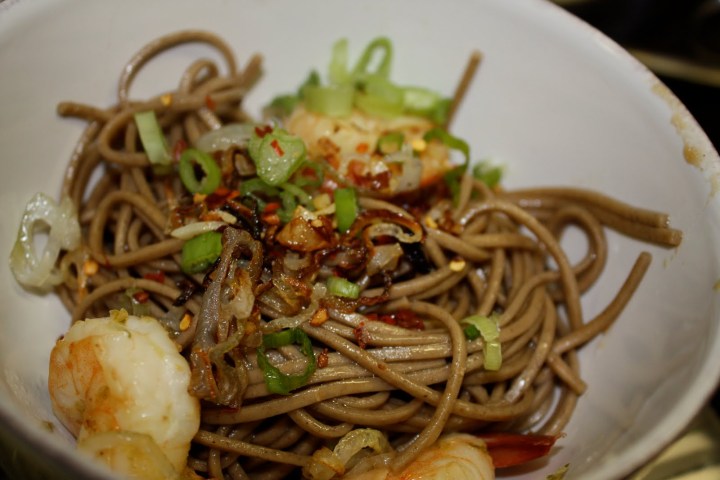 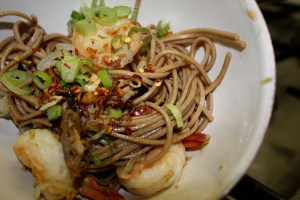 I came across this recipe in Food and Wine magazine and I have been craving the flavors ever since. Soba noodles are made of buckwheat flour which provides vitamins B1 and B2, several minerals and nearly twice the amount of proteins found in rice. Garlicky, spicy and bright with lime, this is a dish that is full of flavor and warms the body on cold winter days. 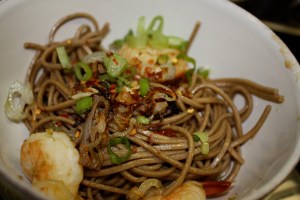 Bring a large pot of water to a boil. Add soba noodles and cook according to directions. Drain and rinse under cold water. Place in a bowl and toss together with 2 tsp of the oil with the soy sauce, tamari and agave syrup. Set aside.
In a skillet, heat 1 Tbsp of the oil. Add the shallots and cook over moderate heat, stirring, until golden brown and crisp. Using a slotted spoon, transfer to a paper towel. Do the same with the garlic and transfer to the paper towel.
In a bowl, combine the lime zest and juice with the remaining 1 Tbsp of oil. Toss in the shrimp and season with salt. Saute the shrimp in the pan over medium to high heat, turning once, until glazed and cooked through.

Arrange the noodles in a bowl. Top with the shrimp and sprinkle with the scallions, cilantro, crushed red pepper and the fried shallots, garlic and sesame seeds. Serve with lime wedges alongside.
Serves 6
Enjoy!

Welcome to my website! This is a place where I hope you find nourishing inspiration for movement, cooking and all things natural health. Follow along as I take you through my life as a natural foods chef, fitness professional, creator and business owner making leads in the contemporary body-mind fitness community and being a full-time mom. Life can be interesting, adventurous and exhausting but it's how you decide to live each day that ultimately makes you who you are. Click here to read more. Click here to shop.

Come take my classes! DEFINE your balance with Houston's most transforming and reenergizing workouts.

Click Here to watch the newest Mirror / Mirror episode with Erin making the most of "super" foods!